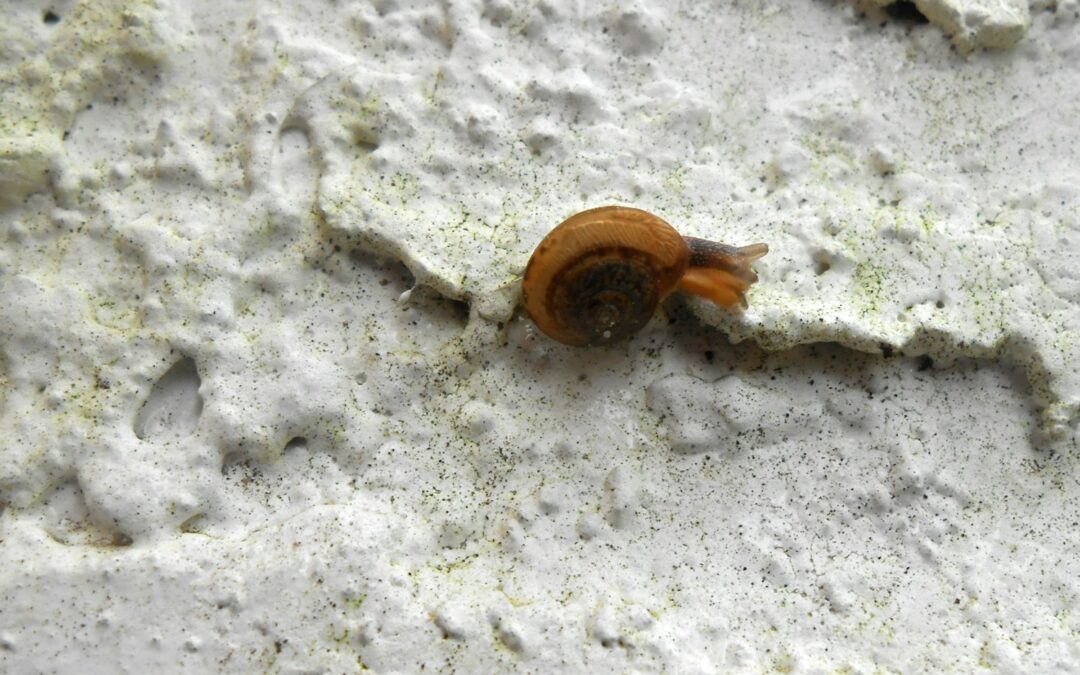 An old tale goes that you can set out a small dish of beer to catch and rid your garden of snails, but you may attract local vagrants as well. What does this have to do with Building Envelope Science?

It was a large multi building apartment complex in central Florida. Only about 6 years old, and the owner wanted a new paint job to freshen up the buildings. It was a typical painting/sealants job to clean, prime, seal and paint. A minimum one primer and one finish coat using a high build water-based elastomeric paint system. A consultant was hired to develop the specifications and provide quality control and assurance. Bids were solicited, and a qualified painting contractor was selected. After a few months, the buildings were all painted and ready for turnover and final payment. All was fine, until, damage begins to appear! 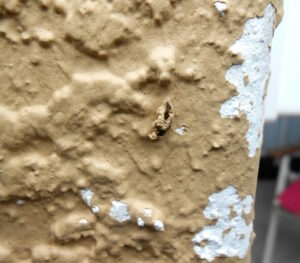 Within a few months of completion, the property management noticed areas where paint was deteriorated or missing in areas of the wall surfaces. Spots, about a half dollar in size, were scattered about the wall surface in random locations. The spots indicated that the tan colored top coat was largely gone, leaving only the white primer exposed. It was isolated and primarily in the lower five to six feet of the exterior wall. Very minor areas of the damage occurred higher up, but always below the second floor accent band. It was a peculiar phenomenon. The most peculiar aspect of this case was that there were no paint chips on the ground below the damaged areas.

Where we saw paint spots were deteriorated or missing, we always noticed something extra. Small, dark, tube-shaped objects stuck to the surface of the wall. At times as many as ten to fifteen of these objects within a square foot area. They were stuck to the painted wall over perfectly painted surfaces. Many were curiously pigmented the same color as the paint. They were very small, so we pulled out our pocket microscopes and loops to get a closer look. Now, hold your breath. 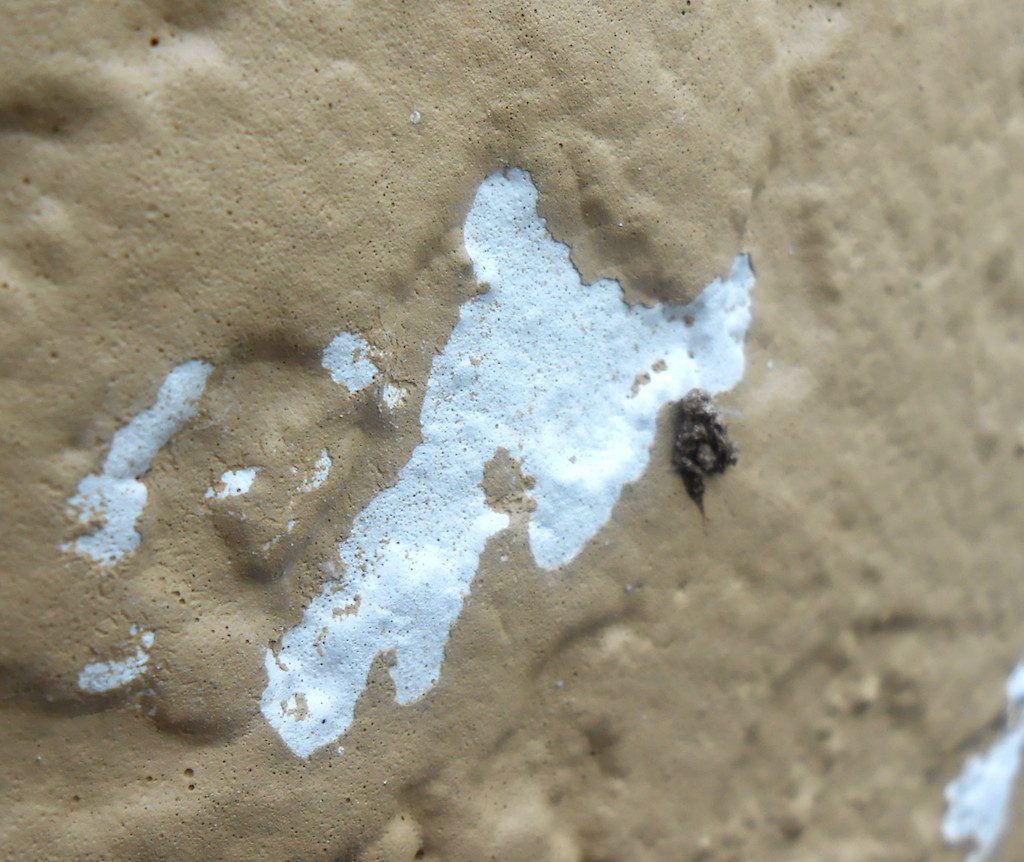 What were we looking at? Turns out the objects were the excrement of some small animals, colored with paint pigment. But how could this be? Could the painting contractor actually have painted over this much debris? Not according to the consultant’s records. These walls were thoroughly cleaned prior to any painting work being started. This residue problem had to have come after the painting was complete. There is only one practical way we know of to get paint pigment inside the stomach of an animal. It has to eat it. Then the undigested remains would be excreted in the animal’s waste product. This might explain what had happened and exactly what we were seeing. Armed with this information, we hunted the wall surfaces, the soil below and the bushes adjacent to find the culprit animals. Bingo, we found some small snail shells! Could this be the culprit?

Could snails be depositing pigment-laden waste to the walls adjacent to the damaged areas? This stuff was full of undigested paint pigment. It was completely embedded within the excrement of snails that had traveled across these walls, stopping only for a meal, and to relieve themselves along the way. 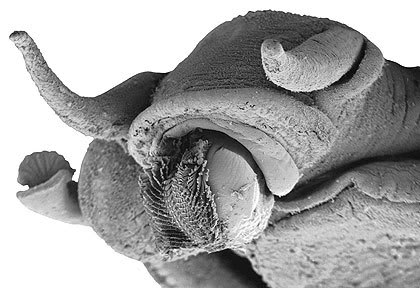 We continued to hunt for some actual living snails, as the shells alone could not have done this damage. Then we saw him. We spotted the first snail on the lower portion of a column. He was a small snail observed in his ‘not-so-natural’ habitat, actually during his feeding time. We caught him red-handedi, munching away on that nice new elastomeric paint. Then we saw a few more of the culprits. These guys really seemed to like the paint. It became clear that the hungry snails were causing all of this mischief. At this point we didn’t know who they were, or why they were methodically devouring the paint on these buildings. Come to think of it, we basically knew very little about snails. So we gathered some specimens, and enlisted our colleagues in academia to help identify these shelled vandals. 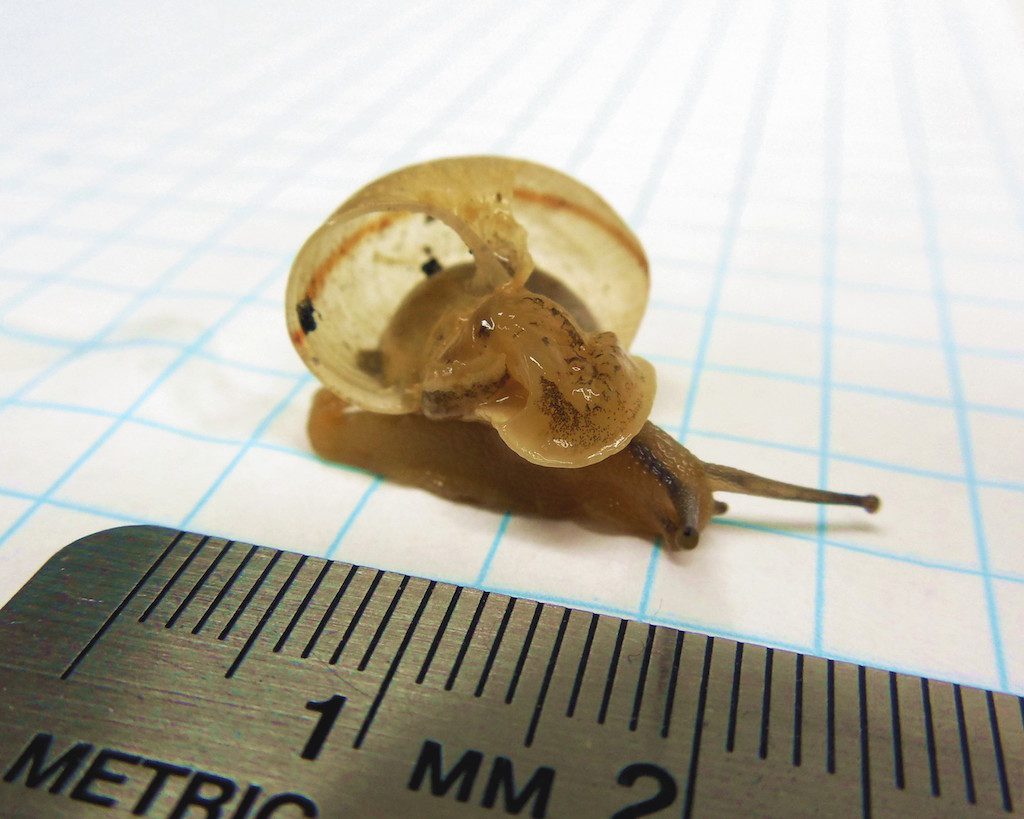 With the help of two talented biologists and snail experts in North Floridaii, we now know our paint-eating friends as the Asian Tramp Snail, a.k.a. Bradybaena similaris. Terrorizing backyard gardens in America since 1939, this invasive species comes all the way from Asia and has since traveled into Florida. Now, these guys typically feed on soil and foliage–not paint. Something was afoul here. It wasn’t time to break out the garlic and butter just yet. What did these guys like so much about the paint? A little more research would soon answer the question.

Something about this paint was attracting the snails, so we began to research the composition to see what secrets it held. What was the delicious ingredient that this paint contained? It turned out to be Calcium Carbonate, CaCO3. The paint from the bucket contained 33% by wet weight measurement, and upon drying contained up to 54% by dry weight measurement. This simple compound, CaCO3, responsible for so many things on our planet, is also the building block for the shells of these guys, which they call home. Snails typically eat soil and vegetation to get the calcium carbonate they need, but in this case the paint was much more tasty!

Our friends had atypical appetites. These guys were like a kid in a candy store with grandma’s coin purse. They could get everything they needed to build their home–without leaving home–simply by devouring the new paint on the walls. Time to issue an eviction notice! 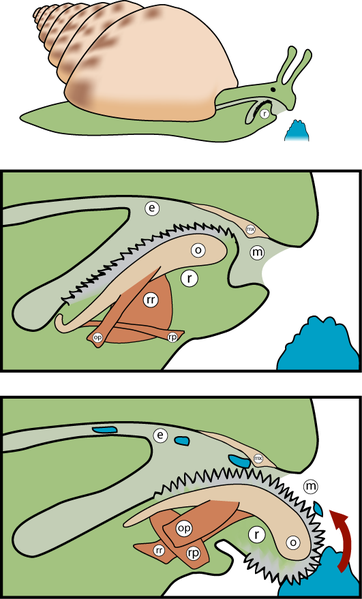 These guys had clearly overstayed their welcome. So what was the solution? Simple enough: Iron Phosphate, a non-toxic snail bait recommended by the local Extension Office to “evict” the unwanted guests. This material would be applied around the perimeters of the buildings as often as needed, essentially acting as both a barrier and a poison to the creatures. That was the first step. Then, time to repaint.

Only the lower portions of the buildings needed repainting. (The horizontal accent band was heroically acting to deter the snails from climbing any higher up the wall.) And maybe we should try a not-so-delicious paint this time. With the track record here, we selected something that contained none of the goodies responsible for this mess. No Calcium compounds to tempt any stubborn snails that might remain after the Iron Phosphate attackiii.

In Building Science, we sometimes need to dig deeper, and to think outside the box. One of the most important lessons we have learned in our field is to always ask questions. Why were these little black objects stuck to the wall where we were seeing the paint “failures”? How did the paint pigment get into them? Was this an isolated incident? Or could it be responsible for other paint failure cases? Should the coatings industry now take note and look at alternate formulations for their exterior paints? Further investigation is needed, but at least for our particular client, we answered their pressing question of: “What is causing the paint deterioration on our freshly painted walls?”

Paint damage oddities in your life? Contact us for an investigation.

i Or, whatever the equivalents of hands are, for a snail.
ii  Thanks to Dr. Henry Lee and Bill Frank of the Jacksonville Shell Museum.
iii Since Iron Phosphate is very lethal to snails, we would assume any remaining strongholds to be evolutionary super snails.